Estara, what a lovely post! I think you might have been the shameless pusher who first pointed me in the direction of The Touchstone Trilogy. Cass really touched me. Last year I even sent Andrea a note after a visit to the Rocky Mountain backwoods that was so remote there were no sounds or sights that any other human could have made. Looking forward to reading the other posts. Kyahgirl, hi!

Kyahgirl: aww, thanks. Not only because my real name is Cassandra, always hide behind Cassie but this book had me from the first couple of pages and I am relieved to see I am not the only one who could Not put it down. I bought the others books as soon, As I could and now that I have read them all I will go back and re read them. Not something I often do. Please make another book to the touchstone series.


I know Caszandra has more to say! Please write more about Caszandra! Honestly, these books are so good I think almost everyone is probably in the right demographic to love them! Also, sorry it took a couple days to get your comment out of moderation — I have very poor internet access from home during the summer.

Love Cassandra. It is very, unashamedly self-indulgent. I wasn't super thrilled with the turn the story takes in Caszandra some of it is just personal preference but part of it Just what it says it is. If you are one of those people like me who just wants to know what happens after the excitement hs died down and the threat of impending doom has lifted.

Pleasant follow up to Cass and Zaorens new lives as family and was a sweet way to spend an afternoon in the sun. Severe oversight in world creation. View all 12 comments. Jul 06, ala rated it really liked it Shelves: Let me start by saying that I really, really love this author -- her characters are fresh and compelling, her writing is witty, her story ideas are original and her worlds are creative.

That being said, I wish she wasn't a self-pub, because I think a good editor could help tighten up her plot-lines, suggest cuts to scenes that slow down the story and catch loose ends I really enjoyed the first two books in the trilogy, but in my opinion the third book dragged and suffered from the first perso Let me start by saying that I really, really love this author -- her characters are fresh and compelling, her writing is witty, her story ideas are original and her worlds are creative.

I really enjoyed the first two books in the trilogy, but in my opinion the third book dragged and suffered from the first person narrative.

Cass gradually finds out she has capabilities which will make her an important player in the Setari's fight the dangerous creatures that come out of the gates between worlds and the struggle to find what is causing the gates to rip in the first place. First of all I want to gush unreservedly about the first two books. Cass' survivor story, then rescue, then adaptation on new planet to new culture was fascinating. Even though parts of the story tended towards episodic -- for instance, in a chunk of the book Cass accompanies setari squads on patrol where they fight one monster after another -- each situation is so creative and different from other things I've read, that I remained thoroughly engaged.

Also, I should add that as with other Andrea Host books, the love story is amazingly well done. Damn, does this author know how to write romantic tension! And did I mention that this author was witty? A number of sections had me laughing out loud. Here are a few I enjoyed: Cass is still learning the language on her new planet: Yoda with a lobotomy.

The reason we're all on downtime is you're playing with some profanity stray?

An "Are you high? I was actually thinking "In whale song? Here I think the first-person diary-entry narrative really shines as Cass gets to talk about herself hopelessly and obsessively crushing on forth squad captain Kaoren Ruuel who is one of the most amazingly psychic and space-ninja-y of all the Setari -- has many psychic special site abilities. Yet her comments are both relate-able and self-deprecating such that it is engaging and charming.

But he was just a little way down the shore from me then, and said: Though I guess gazing intently into the distance is part of his job description. In comparison, I found the third book slightly disappointing. I think the main problem for was that since the romantic element resolved at the end of the second book there just wasn't enough of an emotional driver to the action. I don't think it necessarily had to be another romance, but Cass was practically living happily-ever-after before most the other action of the novel resolved, and it was kind of a let-down. 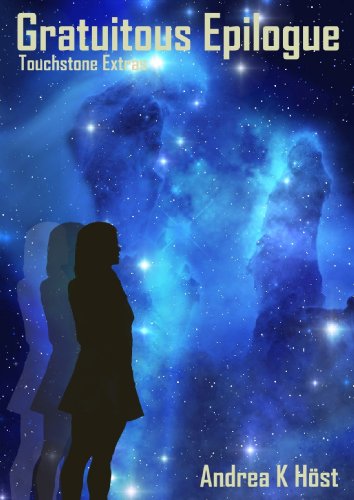 Also, as other reviewers have noted, the sudden adoption of 3 kids was kind of hard to swallow -- while Cass until then had seemed somewhat a normal teen, albeit amazingly brave, selfless, cool, and with special powers, it kind of pushed things over the edge of probable impossibility And ended up slowing things down and diluting the focus of the final book.

An editor might have helped here! The first person narrative also became a hindrance in the third novel. By this time the reader has been introduced to 12 Setari squads each with 6 members, as well other important characters. I actually think that Host does a good job of creating realistic secondary characters and interesting interaction with them.

But there were just so many, we really needed a few more POV's to have any hope of making sense of so many of them. My final gripe is that in the last novel Cass got too powerful. I love a strong heroine, but I am wary of the "Anita Blake" syndrome -- aka your's truly can get out of any impossible situation by developing a brand new, super powerful, magic power at exactly the right time.

Cass was no where this bad, but her powers got to be so special, that you knew there was no way in hell anyone but her was going to be able to save the world. I personally like a story better when a unique, but not super-powerful, individual, through ingenuity, perseverance and other valuable but otherwise ordinary character traits, saves the world or helps save the world.

Cass had the character traits -- there was no need to make her superwoman, in my opinion. Anyway, despite my disappointment with the third book, I would recommend this series anyone looking for a creative, well-written, soft sci-fi story with some enjoyable characters, some interesting world-building, a cute love story and a little adventure.

Touchestone trilogy is a favourite read of mine, and I was very happy to be able to purchase its hard cover version after rereading my ebooks for the second time. The series is the story of a young girl, quite average if clearly clever, who suddenly finds herself Very afraid as she progresses in a beautiful but alien landscape, she decides to write a diary, using a present she had in her school bag.

The story is enthralling and the writing addictive. Cassandra's voice is admirable; she's courageous, funny and wise, but never too perfect. Her reactions are exceedingly credible, her thoughts exactly what we could have in this so strange context. As a result the read is one of the strongest sense of reality in fiction I've ever felt while reading a SF or Fantasy book. And the first time ever that I felt like living in an alternate world!

I don't know what would think of it a physics specialist, but the hypothesis were totally credible for me, never over explained with pseudo scientifical explanations just credible and matter of fact. An incredible story, which I'll love rereading very often! View all 4 comments.

It's just been impossible to find something that moves me, that makes me love the characters past the ending. This trilogy did that! Oh did it do that!

I began re-reading before I was even finished reading a lot of that was due to major skimming over some plot points to find out about the two main characters! It's been a long time since I had that slightly achy depressioney feeling because I know something I love is about to be over and this trilogy gave me that. That's not a request! View all 3 comments.

Jul 25, Kara-karina rated it it was amazing. This series made me lose quite a few nights of sleep, folks, but it was well worth it. Gripping and alien world, hot space samurai and amazing adventures of one girl from our world in a universe far, far away. It was an incredibly absorbing and wonderful read, and I'm resolved to go through everything that Andrea has ever written, because I adore her unique style of writing. And what I love is that each and every one of her stories has been refreshingly different from other books out there.

Having said that, this did end up working for me once it became more realistic for Cass to be keeping a diary. I thought Cass had a great voice — sort of snarky, self-deprecating, and honest — and I liked how we got to know her, the other characters and the world via the diary. Basically the story is about Cass making a space for herself in this very different world, helping to beat the bad guys, and oh yes, falling in love. This aspect could so have easily moved the story into pure Mary Sue territory, but for a couple of things: Creating unique worlds without masses of info-dumping, instead sneaking in bits and pieces of information until the reader gets it — that, and just being able to come up with something different.

There were some things that bothered me slightly — the first being more thematic, while the others were less important. On the first, Cass ends up playing guardian to a couple of refugees and essentially setting up home — I did think Cass was a bit on the young side to take on that responsibility, but on the other hand, she and the Setari was in the process of saving their world, so I suspect age does not come into it that much.

I got the main characters straight, but ended up confusing the secondary ones.